Everyone has heard the saying “practice makes perfect”. You were probably told this as a child and you may have said this to your own children. The so-called 10 000 hour rule led us to dream that if we just practice at something more then we will learn how to do that to the best of our abilities.

But, practice makes perfect is a lie.

Practice is important for your child to improve in motorsport, there is no doubt about that. But if you only believe in the 10 000 hour rule you could set your child on a path of stagnancy and possible decline in performance. If you’re shooting for 10 000 hours of practice, then have at it, but know that all practice isn’t equal. Whether your child is racing in the sim, in a kart, single seater, Ginetta G40, or GT car, this article gives the top 3 tips about how to practice in motorsport.

Do you want your child to drive faster?

This article lists scientifically proven methods that will show you how to arrange practice sessions so that your child can:

(1) remember what they practice.
(2) get faster on any track.
(3) perform during unpredictable situations that could steal their podium.

Ultimately, effective practice can improve motorsport skills at a faster rate than traditional practice so you don’t need to spend 10 000 hours.

Suppose your child has a sim championship race on Oulton Park. You might think “let’s practice Oulton Park as much as possible”. But, there’s a better way. Your child should also practice Brands Hatch. You want to develop the skills that are needed for Oulton Park in different contexts and Brands hatch requires similar driving skills to Oulton Park. This is called variable practice and leads to better retention of skill development. Further, by practicing this way your child will also gain the ability to adapt to unplanned race events, which is known as skill transfer. To make this more concrete, a golfer would practice hitting approach shots from 50, 100, and 150 yards in the same session. If you want to prepare your child for a real world karting championship, then have them practice taking a corner repeatedly from different racing lines. For sim drivers: examples of tracks you can practice together are Silverstone with Circuit of the Americas OR Lime Rock with Summit.

But here’s the thing. Your child will actually drive worse during variable practice than if they only practiced a single thing. That is not a typo and this is the hard part about this training tip. Your child will tell you that they’re struggling during variable practice. They will feel like they’re doing worse. But what is amazing is that that’ll do better on race day, which is when it counts. This kind of practice causes worse performance during practice but will cause better performance in the long run. The only catch to this secret is that this can be challenging for youth. Children need to be supported during this approach because they may not have all the skill sets to resist quitting the session. For children who can be frustrated easily, I would try variable practice once they’ve had a few sessions of standard practice. That said, having your kid frustrated can teach resistance, perseverance, and importantly, it will enhance their motorsport abilities down the road for race day. Just give that in doses once they’ve got the hang of something.  The good news is that the enhanced performance from variable practice only takes a few days to happen, so they don’t have to wait long.

Aren’t practices supposed to be organized? Random is the exact thing your child should be doing. Instead of practicing complex corners for hours on end, which is called blocked practice, your child should practice a variety of different skills together. For example, in one session your child could practice: complex corners and big stop braking. This is known as random practice and improve learning. Similar to Secret#1, the improvement will take a few days. When you practice this way, you only have to do it once. The best way to practice randomly is by picking skills that are completely different, like big stop braking and complex corners. So pick two skills you’d like to improve at and do them as shown below under “Random Practice” instead of “Blocked Practice”.

Frustration is most often a sign that your child is learning. Mistake-based learning during practice does two critical things for training: 1) it gives your child the most information to learn and 2) it is the best way to prepare the brain for enhanced learning. When your child makes a mistake that is wildly off, they are given more feedback information than if they only narrowly missed. At this time of frustration, their brain chemistry changes. Their memory centers are flooded with a chemical called Noradrenaline. Think of Noradrenaline as the mortar that holds the bricks of feedback together. So encourage your child to do something slightly harder and support them along the way. Believe it or not, learning by experience is often as effective as guided instruction so your role should be supporter, not a technical coach. So to recap: when your child practices at a level that is harder than they’re capable of, they make mistakes, get frustrated, and then remember what to do the next time. Remember, the brain is doing a ton of work thats hidden; you can’t see its muscle exercising, but it is.

But how much harder should the practice session be?

The best way for your child to learn a skill in motorsport is to practice at a level that is about 4% harder than their current ability. As a concrete example, if your child is looking to improve by 10s at Silverstone then their goal should be to practice at about 4% of that goal (e.g. 0.4 second faster per lap). 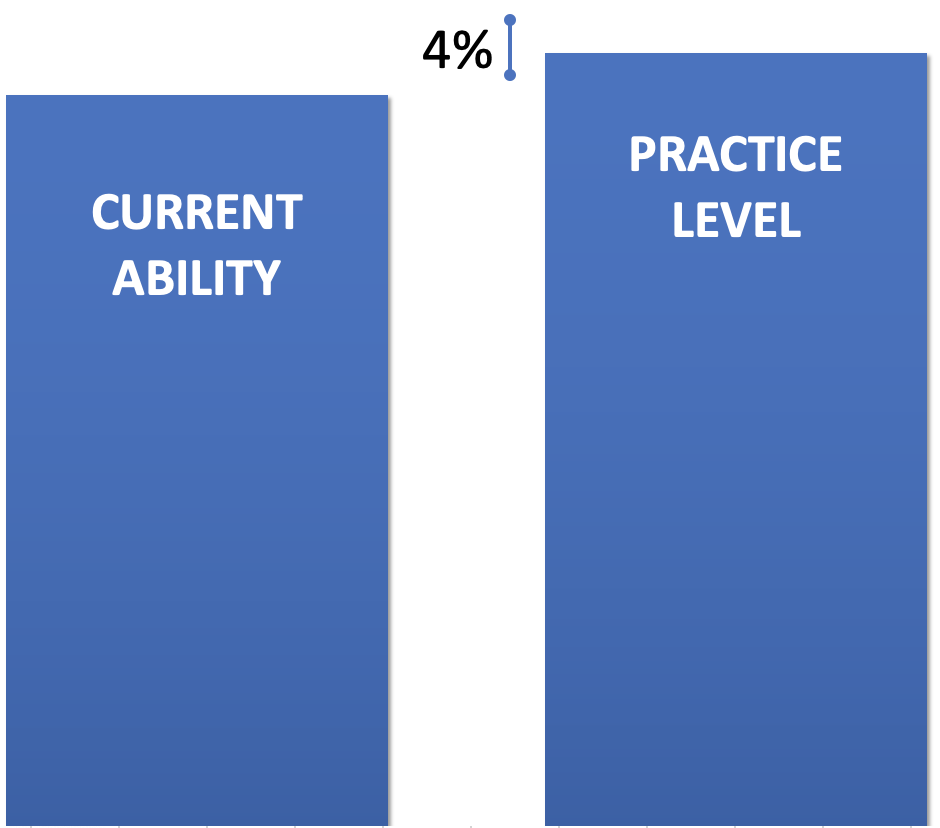 Once they’ve got that under their belt, then try another 4% (so 0.35 s faster per lap). When your child step out of their comfort zone their brain gathers information on how to improve. However, if they attempt something that is way beyond their ability (say improving by 5 s at a time), there is too much new information for the brain to take in and turn into learning. With so many things to improve, their brain becomes overwhelmed with sensory information and they miss the piece of feedback they need. This is a key component of the so-called challenge point framework. The good thing about trying something that is 4% harder is that they are given the opportunity to rise to a realistic challenge they can succeed with. The brain chemical at work when they succeed is dopamine (but that’s for another article). In my experience, the end result of this approach is that the athlete feels great and is eager for the next challenge. This is the sort of thing that makes progress feel easy. And for the parent, it’s a lot of fun to watch.

This article is the first of 3 articles explaining how to improve your child’s performance in sim racing or real world motorsport. Stay tuned for Part II. In the next article, we will discuss how and why an expert (e.g. a coach) can help bring you to your peak performance.

If you have a child who is interested in youth motorsport training. Please contact Dr. Michael King (mike.king@driver61.com), the director of our Driver61 Youth Motorsport Academy.