Today we’re going to take a detailed look at understeer.

Understeer is handling characteristic that is mostly disliked by racing drivers, but it’s important to understand so we can reduce the chances of it slowing us down on the circuit.

Welcome to tutorial seven in our Driver’s University series. In this tutorial our pro racer, Scott Mansell, will cover:

The simple definition of understeer – also known as ‘push’ – is when your car doesn’t turn as much as you ask it to with your steering input. Quite literally the car is ‘under-steering’ due to an imbalance in grip between the front and rear of the car.

The car will have broken traction at the front, and the front tyres will slide across the track surface, however, the rear tyres will still have grip. Therefore, the car is imbalanced and at that particular point in the corner, you are limited by front grip.

The drawing below shows the intended line by the driver (orange) and the path a car with understeer (green) would take. 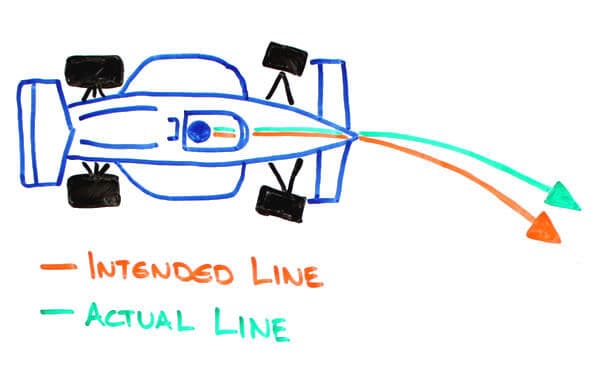 The following diagram shows two paths through a corner. The orange line is the intended, and ideal, racing line. The green line shows a racing line where the front tyres have lost grip and the car has understeered wide. You can see that from the turn-in point the car hasn’t turned as much as the driver wanted, the apex has been missed and the car runs wide at the exit. 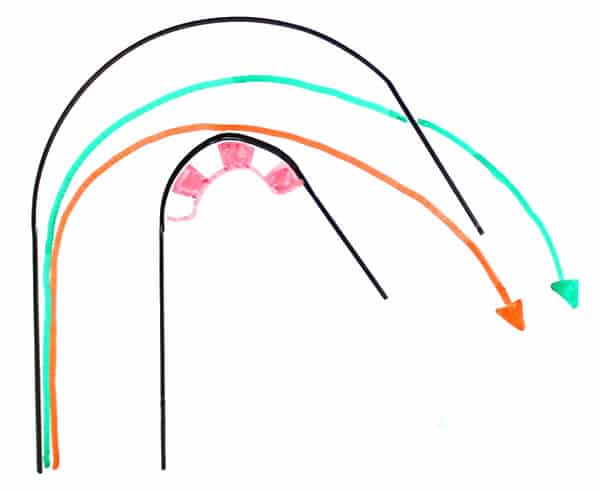 Summary: What is understeer?

The temptation here is to apply more and more steering angle, as the car isn’t turning as much as you’d like. However, the tyres are already beyond their grip threshold and cannot turn anymore, so applying more steering angle is pointless. In fact, it’s really poor technique as when the front tyres grip again they’ll be pointing in the wrong direction!

It’s important to not hold on to the steering wheel like you life depends on it (although it probably does). If you’re gripping the wheel tightly you’ll lose some feeling – have a relatively relaxed grip, that way you’ll feel the car more.

When you feel the car begin to understeer, don’t just apply more steering. Keep the car on the edge of traction and what’s most likely is that you’ll have to reduce you speed somewhat – something we’re going to go over a little later.

What are the Causes of Understeer?

There are a few things that will cause understeer in your car, coming from both driving technique and the cars itself:

In our last tutorial, we covered the vast topic of braking (see tutorial here). As we mentioned there, it’s possible for the braking phase to affect the grip balance of the car at turn-in.

If the grip in the car’s front tyres is being completely used up for deceleration and then the driver asks them to turn as well, it’s just too much load for the tyres to take and they’ll break traction at turn-in.

Once traction is broken the driver will have to slow the car quite significantly to regain grip at the front, which of course will cost lap time.

ENTERING WITH TOO MUCH SPEED

It’s possible to cause understeer by simply entering the corner with too much speed. There’s only a certain amount of speed a car can physically take through a corner – try and take more than this and the car will break traction.

Whether your car loses grip at the front or rear at this point will depend on setup and driving technique, but if the driver comes off the brakes early (allowing weight and grip to transfer to the rear of the car) he’ll likely understeer passed the apex.

ACCELERATING TOO MUCH THROUGH THE CORNER

If you accelerate too much from the apex of a corner, and you car’s setup isn’t perfect, it’s likely that you’ll induce some understeer. This happens because when you get on the accelerator, the rear of the car will squat causing a rearwards transfer of weight and grip. This leaves the front of the car with little traction and so creates an imbalance.

If your car isn’t well set up, whether it be springs, dampers, roll bars or any of the many things you can change, it could cause understeer.

Setting a car up is all about maintaining a good balance – an equal distribution of grip – through all points of the corner as the forces on the car change. I’ll go into more detail regarding how to resolve understeer issues with setup a little later in the article.

How to Correct Understeer and Minimise Time lost

To best explain how to correct understeer we need to understand how the car is reacting at various points in a corner, and so we should split the corner into three parts:

To enter a corner as quickly as possible, it’s important to transition between braking and turning smoothly.

As I always say, being fast is about being smooth. If you try and turn the car in with a hard and fast movement, you’ll shock the tyres and cause them to break traction too early – reducing the speed you can take into the corner.

You can also disrupt turn-in by trying to turn while braking heavily. If the tyre is beginning to under-rotate, even locking, then trying to turn at this point will just cause the tyre to slide. It’s better to reduce brake pressure slightly before you turn-in, allowing some grip to be available to turn the car.

It’s also possible to brake too lightly going into a corner. Depending on your car’s setup you’ll likely want to turn in with a less brake pressure, leaving some weight and grip over the front tyres to aid turn-in. For more information on how to use the braking to manipulation balance, click here.

UNDERSTEER AT THE APEX

By the time a driver is at the apex, he should be back on a balanced throttle – only a tiny percentage, but nevertheless back on the gas.

In longer corners, this balanced throttle phase will last a longer distance and so a driver will have more time to manipulate the balance of the car. If you have understeer during this mid-corner phase, you should play with the throttle to help the car to turn.

Think about the car understeering at the apex – the car is front grip limited and so we need to transfer some grip forwards (again, if you don’t understand this see the video on weight transfer).

If you’re already on the throttle, try lifting it a little. This will cause the front suspension to compress and more weight and grip to move forwards, hopefully removing the unwanted understeer.

If the car is still understeering apex, try leaving the brakes on a little long as you enter the corner, or being more patient with your throttle application on the following lap. The whole point of this is to leave weight over the front of the car for a little longer, thereby reducing the likeliness of understeer.

By ‘on corner exit’ I’m referring to the phases where the driver will be just passed the apex and beginning to increase throttle position as they head out of the corner.

This is the most common form of understeer as the car is squatting at the rear, due to the acceleration, and moving a lot of grip to the rear of the car and away from the front.

Other than forcing the car to oversteer at the apex, it’s pretty much impossible to change your driving technique to remove understeer from apex to exit. The only thing you can do if you feel it starting is to be patient with the throttle.

The last thing you want is to make the car understeer too wide as you exit and have to lift off the throttle as you exit – it’s much better to wait a little longer, get the car turned more, and get on the throttle in one smooth movement.

We’re going to go over setup in detail later in the series, as it’s all quite advanced stuff. However, understeer can be caused and cured through set up.

If you’re new to track days or racing I would strongly advise not to alter your car’s setup. It’s very easy to get lost in spring rate, damper, rake and toe changes and end up a long way from having a balanced car.

For those of you who are more experienced and perhaps have a team looking after your car, please take a look at the following chart explaining understeer problems and which setup changes can help.

If you feel that your car isn’t well set up, but you don’t have the experience to feel and relay the information to an engineer, I’d advise hiring a professional driver for a day to get you a base setup. This way you can be confident that your car is somewhere close to an optimum setup 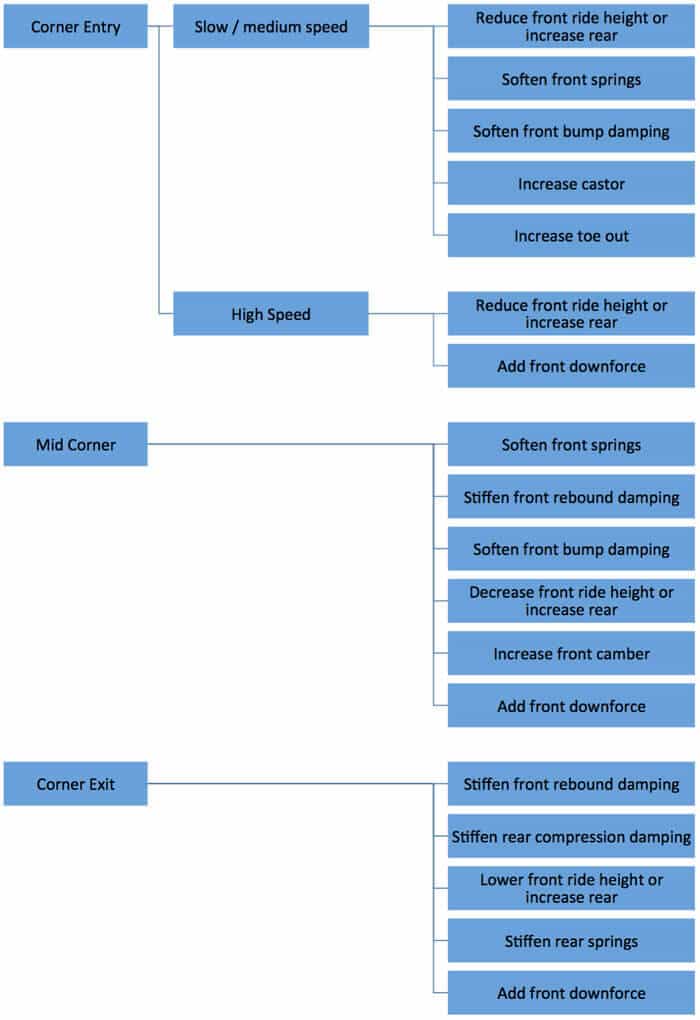