Testing For Grip: How to Find the Fastest Lap in Wet Conditions

“Phil, how much is a front splitter?”

On a bitterly cold, icy mid January morning, we took the Funcup car for the first test of the year.

On a warm and dry day, Brands Hatch is a grippy, fast circuit. Today, I’d classify it more as an ice rink than a race track. It’s slippery!

In temperatures of 1.0c, we took the Funcup car out so I could learn how to find the grip in difficult conditions with some help from Scott.

Thankfully, a small off at Clearways didn’t dampen an already damp day; body kit for Funcup cars is extremely inexpensive.

When you’re on a dry circuit, the racing line is easy to follow.

There’s plenty of grip on the line as rubber is laid down. In normal conditions that rubber almost always gives better grip than the tarmac itself.

In the wet driving on the rubber can feel like you’re driving on ice. The track tyres on the Funcup car are particularly unwilling to grip on wet rubber. If you don’t modify your line and respond to the changing conditions, you are going off.

So the point of driving in the wet is to adapt. The standard advice: follow a different line, stay off the rubber: 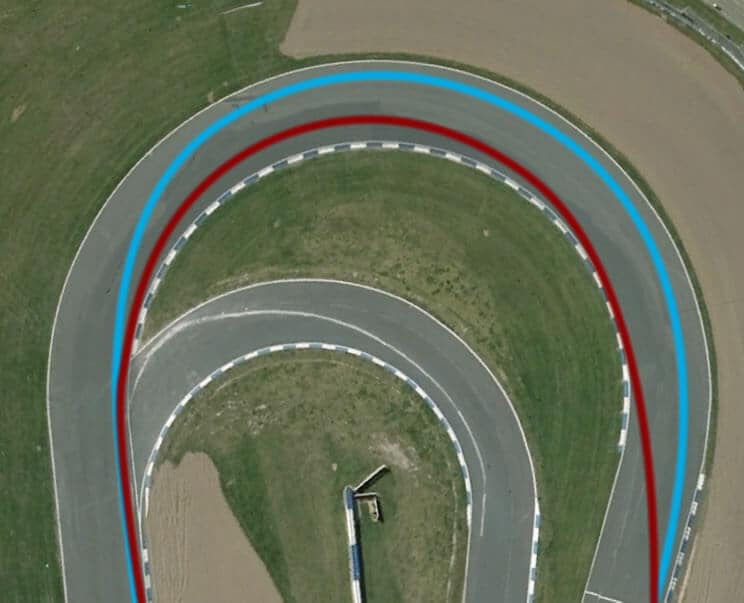 You can only stay off the rubber for so long. The trick to managing a good exit in the wet is to cross the line in as straight line as possible.

If you hit the rubber mid-corner, it gets very slippery.

I can best describe the experience as the grip being turned on and off. As you cross the racing line in the wet, you feel the grip fall away from under you.

If you happen to be turning the car, it’ll understeer until you leave the racing line.

As you cross the rubber, it’s important the chassis of the car is as neutral possible or you could have a spin.

If you’re exiting on the rubber then the chances are you’ll lose traction at the rear of the car and you’ll lose time spinning up the rear tyres.

Driving on the rubber in the wet is slow and it’s hard.

For the fundamentals of wet circuit driving, read this post from Scott.

As I learned in January, finding the fastest time in low grip conditions isn’t always as simple as just changing lines. A wet circuit is a dynamic, evolving place.

Grip can change lap to lap and sometimes it’s not as simple as just sticking to the “wet line”.

What Max Did In Brazil

Did you watch the F1 race in Brazil last year?

I think Max was one of the only drivers using his head in that race. The conditions were extremely wet and grip was limited. Despite the conditions, Max was among the fastest drivers on the circuit.

So what was he doing differently? 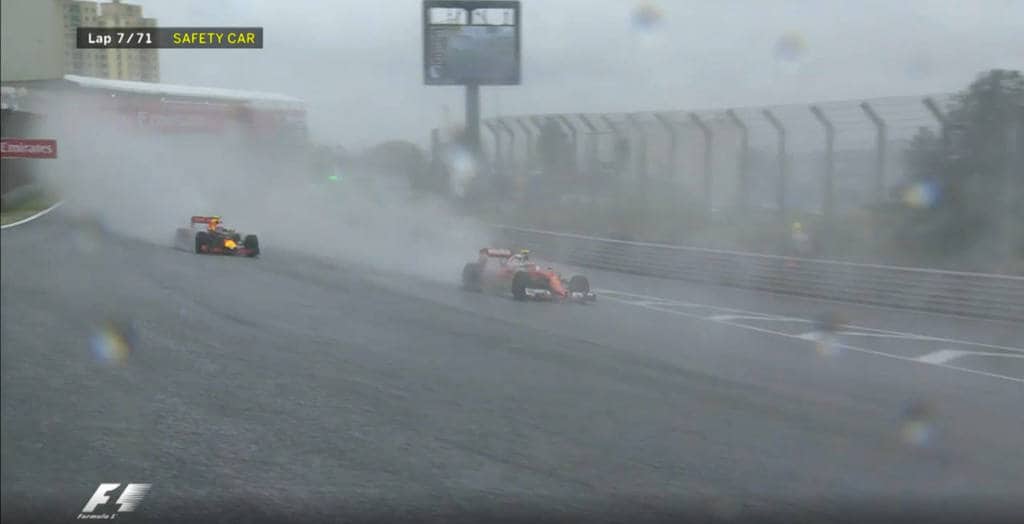 His strategy during the safety car sessions was a real insight into his plan of attack for the green flag.

Often, he was the only driver making full use of the circuit, not just weaving to warm his tyres but investigating areas of the circuit the other drivers weren’t touching. He was collecting information vital to understand grip levels in every corner across the entire circuit. 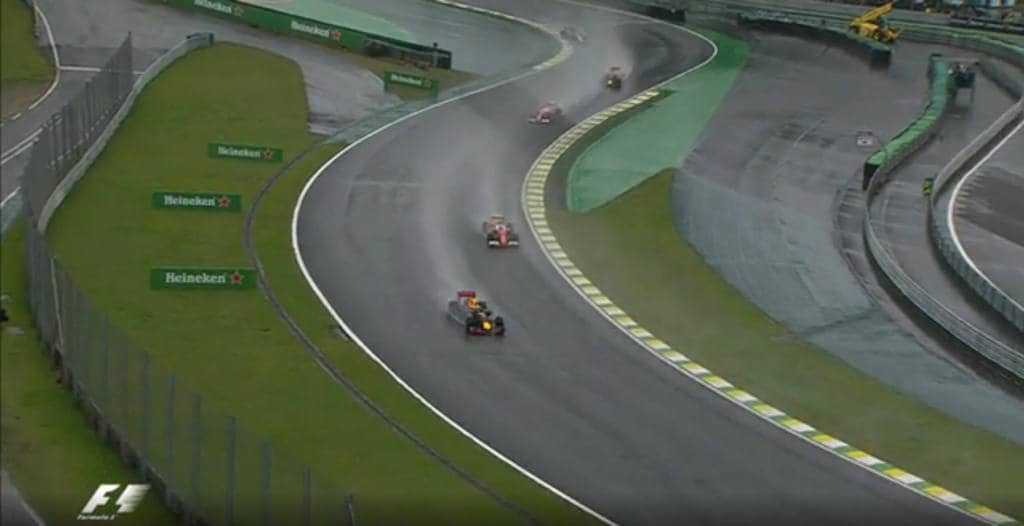 Max Verstappen ended up being the man to watch in that race.

What was surprising was that most of the other drivers weren’t trying different lines. Max comprehensively outranked professional drivers with many years more racing experience. 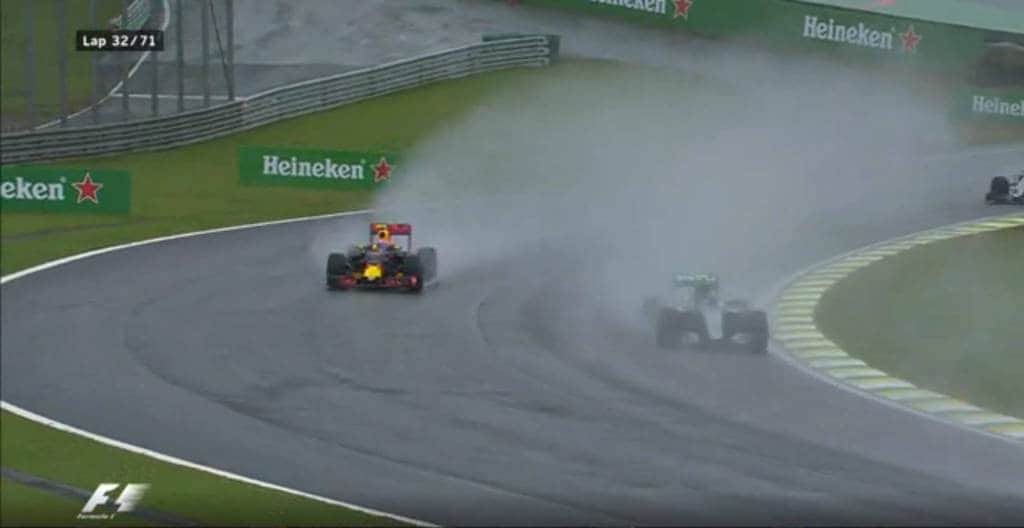 Recalling the information later and making other drivers look like amateurs.

So the takeaway from Brazil is always be testing for grip levels, build up a picture of the best lines based on the your delta and be prepared to modify your approach.

As an Am driver this can be harder said than done. It’s easy just to attempt to stick to a line and hope for the best, where a Pro should be looking for grip everywhere on the circuit.

This driver can handle his Caterham perfectly well but he’s not doing anything differently on each lap. I’m pretty certain he could be a lot faster than he was on the day.

Changing your approach can be difficult. It’s exactly why having a driver coach with you on the day can pay dividends.

What I Learned at Brands

A good way to test your progress in difficult conditions is to be able to recall the behaviour of the car and the track conditions at every corner. It’s harder than it sounds – when you’re driving quickly you can be close to full mental capacity. If you’re at full mental capacity you’re not making space to learn efficiently.

This is important. Probably the best advice I can give you is drive the circuit at 80%/90% and gradually increase your pace after you’ve collected 2 or 3 laps of information about the circuit. By then you’ll be in a good place to start choosing optimum lines and spend more time looking at your lap delta to fine tune your approach.

There were a few surprises at Brands. Lines into Paddock Hill Bend and Surtees were no different to the dry line. Granted, there was plenty of movement in the car through the corners but on the day, those were the lines.

In Druids, there’s a patch of new tarmac on the inside of the corner. You could carry a lot more speed into the corner, get the car on the new tarmac, brake and hug the inside at a significantly higher speed than on any other line.

Graham Hill was extremely slippery but you could carry a lot of entry speed and get away with it by taking a lot of kerb (in the Funcup car, that’s OK). The trick to a decent delta was to get the car as neutral as possible as early as possible or the car would oversteer on the exit. A decent exit out of Graham Hill has a huge effect on your lap time at Brands Indy.

Clearways was also extremely slippery. You can see how close I came to coming of the circuit on this lap!

The fastest line we found was to exit Surtees as normal but hug the inside (staying just slightly off the kerb) all the way round and exiting onto the straight on the inside. This took a lot of patience but the reduced distance at a slightly slower pace than following the circuit around the outside was the faster choice.

This was a much faster lap although I never quite put a perfect lap together. I carried too much speed into Clearways and ran out too wide. Recovering from that mistake felt like it was taking forever. I couldn’t get the traction in the second half of the corner and the result was a much slower exit! Very frustrating.

Of course, getting all of this together in a single lap proved slightly beyond my reach that day. The best time of the day (Scott!) was 6/10ths faster which was all found in Clearways.

Nevertheless, it pays to be willing to hunt around for the grip on the circuit and as I learned that day, the “wet line” isn’t always fastest.