Depending on the particular corner of a circuit, your braking, racing line and whole method may change. As driver’s we’re trying to extract every last tenth of a second from our lap time, so it’s important to understand these differences.

Welcome to tutorial #11 of our Driver’s University series. Today we’re going to examine how we should change our technique for different corner types.

Of course, no two corners from any race circuits are identical, but we can categorise corners into three main types – based more on what follows them rather than the corner itself.

We can use these three categories – providing the driver is fast and consistent at corner entry – because the straight that follows a turn is more important to lap time than the turn itself.

Therefore, we can separate each corner into being:

With each of these different corner types, we get most benefit if we have a different driving technique.

Firstly, you may ask how we define a short or long straight? Obviously, that’s a little tricky but I’ll for the purposes of this tutorial, we’ll say a long straight is a section you could consider overtaking on, and on track days, the straights where the organisers allow overtaking.

Corners Before a Long Straight

A car is fastest when it’s in a straight line.

That’s not to say we should only drive our cars in straight lines and point-to-point, but with corners that precede a long straight we must try to open corner exits as much as possible to reduce lap time.

Exit these turns with just one mph more speed at the exit, and you’ll continue to carry this advantage down the whole of the following straight. Cumulatively, this totals to quite a time saving.

The diagram below shows an example slow speed corner with a long straight following. 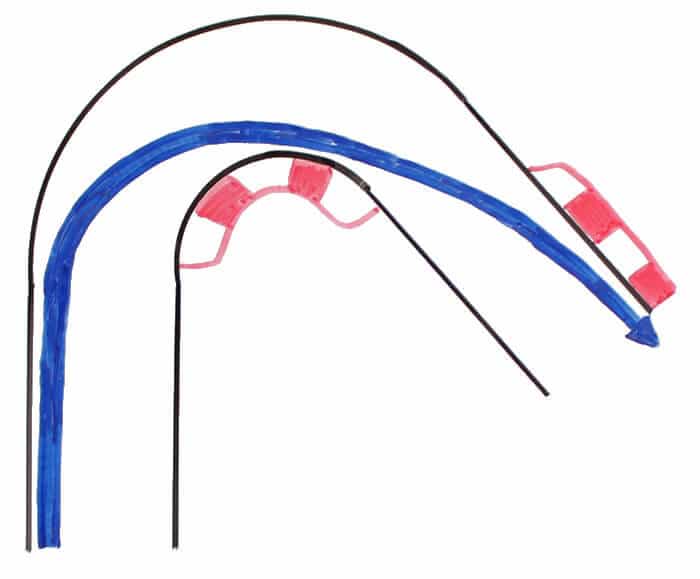 With this type of corner it’s advantageous to brake a little earlier, turn-in quite late, apex late and open up the exit of the corner to allow getting to full throttle promptly.

Here’s a summary of what you need to do:

Corner Before a Short Straight

The diagram below shows an example of what I mean by a short straight – it’s merely a linking straight between two corners with no time for a long period of acceleration or overtaking. 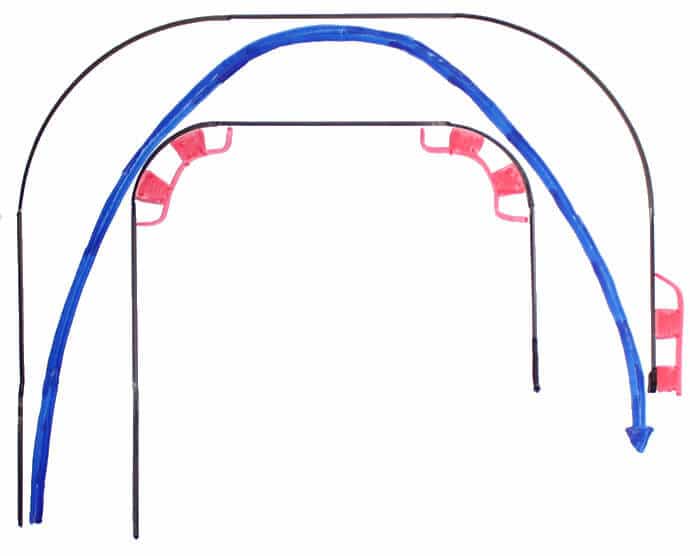 With this type of corner, the opportunity for gaining time is all on corner entry, as well as the exit of the second corner depending on the length of straight that follows. To keep things simple, we’ll ignore the second corner for the moment.

Because the straight after the first corner is so short the priority is not the exit – it won’t be long until we have to get on the brakes again for the second turn and so any extra exit speed we carry isn’t that important.

As we don’t need to focus on exit speed, you should try to carry as much speed into the first apex as possible. The idea is to stay on the throttle as long as we can and turn in towards the apex slightly earlier than we might think.

As you can see from the diagram below, a lot of the turning is done at, and after, the apex. We’re driving across the track a little in the braking zone, which allows the driver to brake more heavily, even after turn in.

Once you’re passed the apex, it’s necessary to position the car so that you maximise the exit of the second corner.

In our example, there is a long straight following so we should change our technique to open up the exit of the second corner and get to full throttle as soon as we can.

Here’s a summary of what you need to do:

A Sequence of Corners

Sequences of corners are arguably the most fun on a race track. Think Maggots, Becketts, Chapel at Silverstone or turn 6, 7 and 8 at COTA.

They do, however, cause some difficulty for drivers. It’s why these types of bends are so rewarding when you get them right.

When one corner follows another, your exit line from one is the entry line to the next. So how do we make a decision on which is the most important and which racing line we should take?

As always, the corner preceding the next long straight is the most important – any extra exit speed here is carried down the straight and makes for a faster lap.

When thinking about racing line, we need to work backwards from the final corner in the sequence before the straight.

Think of the last corner in a series as you would any corner before a long straight. Aim for a late apex and to get on the accelerator as early as possible at the exit – maximising speed down the following straight.

You can see on the track map below that we’ve opened up the last corner in the sequence as much as possible. The turns preceding this are all a bit of a compromise, but the idea is to maintain high momentum and position yourself well for the final corner. 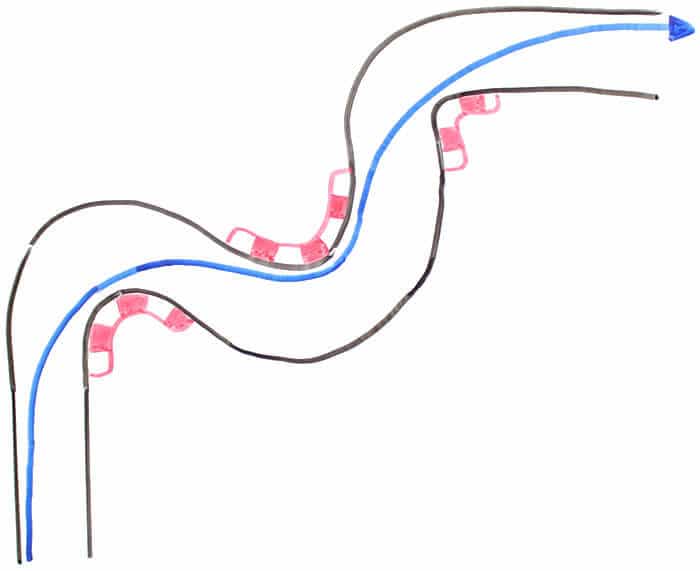 When you have the car at the edge of grip (see tutorial here for more information), your line isn’t going to be perfectly the same on every lap.

I’m not talking about huge mistakes, but rather small changes in racing line as the car naturally moves a little tighter or wider than intended.

In a sequence of corners, it’s important to be dynamic. If you run a little wider on the exit of one turn, you’ll have won a little time, but you’ll have compromised the entry to the next.

These changes are all manageable and won’t cost you any time, but you must not stray too far away from the ideal racing line – having good vision throughout a sequence of corners is critical to getting this right.

When driving on track, I find that if my line through a corner feels right, it’s fast. This comes with experience and seat time but use the information in this tutorial to confirm your gut feeling about optimising racing lines for different corners.

If you’re not sure about some tricky lines or want to do some extra research before you head on track next, be sure to check out our in-depth circuit guides where we’ll explain the perfect lines around various circuits.

As always, thanks for reading and I’ll see you next time, Scott.