Not all corners on a circuit have equal importance, as carrying good speed into, and more importantly out of, can result in various time differences depending on the type of turn.

In today’s tutorial, we’re taking a look at how to prioritise corners at a circuit to help reduce lap time.

Not all corners on a circuit have equal importance, as carrying good speed into, and more importantly out of, can result in various time differences depending on the type of turn.

Therefore, it’s important that a fast driver is conscious of which corners he should focus his attention, both regarding adapting racing line and car set up to suit the most significant turns.

When we’re examining a circuit as a whole, it’s important to know that each corner will have a varying level of importance, or rather a varying significance to affecting overall lap time.

There are a couple of ways a turn can affect lap time. They can either directly benefit, or hinder, lap time due to the nature of the corner and following straight or due to how challenging they are to a driver.

As I’ve spoken about before, racing cars want to go fastest in a straight line.

Therefore, corners that lead onto a long straight are critical; carry an extra few mph onto a straight and you’ll maintain the advantage all the way to the next braking zone, resulting in a significant lap time reduction.

Then, there are the corners that are challenging for drivers – usually turns that are fast and have little run-off and require some ‘bravery’.

Although we all have our strengths and weaknesses, the biggest difference I find between my clients and myself is in these faster corners.

Usually, the loss of time is in the corner entry, where I’ll decelerate less and carry more speed into the apex – but we’ll go over this in detail later in the tutorial.

What Types of Corner Are There?

When we’re studying a track map before we head out to a test day or session, we must organise the corners into various types.

This will help us understand how to prioritise them and also give us an overview of what kind of circuit we’re at. Is it a fast and flowing track, or is it a slow, traction-focused circuit?

There are three types of corners to think about when we’re prioritising turns at a circuit:

Corners that lead onto a straight are important for the reasons I gave a few paragraphs ago: carry a little more speed out of the corner and you’ll take that advantage all the way down the straight, resulting in a significant time gain.

The graph below shows a comparison of speed vs. distance for two drivers; red and blue. As you can, both drivers begin braking at the same time and initially decelerate at the same rate.

However, the blue driver continues to over slow the car, has a lower minimum corner speed and never make the time back up.

This is a typical data trace between a pro and non-pro. The green line shows the time loss, as you can see it continues all the way down the straight which will result in a big time loss. 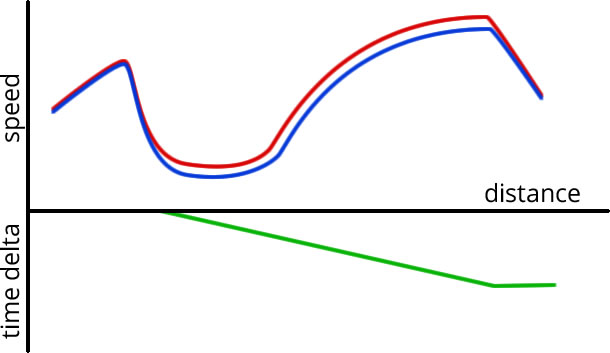 Corners at the end of a straight are important because they’ll have a reasonably sized braking zone, where you can win or lose a lot of time. However, because you’re in the braking zone for less time than a long straight, they’re less important.

The graph below again shows a comparison of two drivers. You can see both drivers arrive at the corner at a similar speed, but the blue driver begins to brake first. As he continues, he realises his mistake and releases the brakes to carry maximum apex speed, also making a good exit.

The time delta loss here shows an initial spike – the difference in ultimate braking points, but then it levels off as the blue driver manages to complete the rest of the corner optimally. 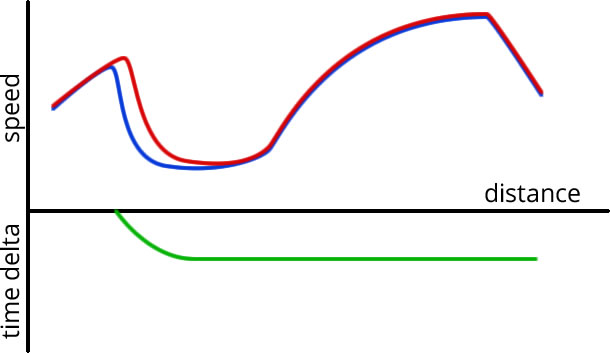 Finally, corners that lead into other corners are the least important across the circuit. As you have probably guessed, it’s because they don’t have a long straight after them, so long as you carry good apex speed, there’s little time to be gained or lost.

The goal in these types of corners is to ensure your car is positioned well to maximise the next turn, especially if it leads onto a long straight.

Which Are the Most Important Corners?

As you can imagine, prioritising corners around a whole circuit is not as simple as this. No two corners are the same, and many are a blend.

However, we can organise each type of corner more accurately. I prioritise corners in the following order when studying a track map:

Notice how the faster corners take priority. This is because the faster a car is travelling, the more difficult it is to accelerate and so any loss of speed at entry is harder to make up again.

This is due to the higher wind resistance and longer gear ratios resulting in the car accelerating more slowly out of the faster corners.

As we’ve already mentioned, it’s most important to get the entry, mid-corner and exit perfected in the faster corners.

With this in mind, take a look at the track map below from Donington Park in the UK and think about which corners you would prioritise. 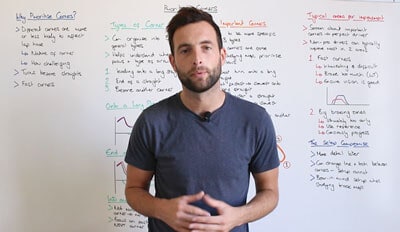 In order of importance, here’s how I would prioritise corners at Donington Park:

Areas for Improvement & How to Gain Time

Given that a driver has good technique and is consistently fast, we’ve already covered how to prioritise corners of a circuit.

However, as drivers, we have stronger and weaker areas – and in the poorer areas, we can often find a lot of time.

Over my many years of coaching and heavy use of data analysis, there are a few types of corners that stand out as significant areas of improvement for non-professional drivers.

The issue here is that fast corners are simply demanding and can be a little intimidating.

Non-professional drivers will tend to over-slow the car, they’ll brake too much and put too much weight over the front tyres.

At this point, the rear feels very light, and it’s difficult for a driver to understand how he can take more speed into the corner. As we spoke about in the last tutorial (see here), the driver has created a non-optimal limit and a lack of balance due to his technique.

The first thing to get right in this situation is vision. I’ve spoken many times about the importance of having a long and broad vision, and it’s even more important in fast corners.

We must understand that how far you look ahead must be in terms of time, not distance. The faster you go, the further you need to look ahead.

Then, you have plenty of time to understand how much speed you can carry into the corner and which racing line you should be on.

You should also think about your braking. In the fast corners, there’ll almost always be a big difference in brake pressure between my clients and me; I’ll have a longer, softer brush on the brakes, whereas their’s will be more of a stab.

If you have a sharp stab on the brakes going into a fast corner, you’ll shift the car’s weight around too quickly, lowering it’s ultimate grip level.

This puts you on the back foot straight away, with the rear of the car feeling very unstable and not giving you confidence to carry more speed on the following lap.

It’s imperative to make sure your braking input into fast corners is gentle and not to unsettle the car too much.

Other areas for significant improvement are usually in the larger braking zones – the deceleration areas where you’ll change down a couple of gears or more.

The non-professional driver will usually not make the most in these heavy braking zones and might brake a 20–50% too early.

Maximising the big braking zones is necessary to keep lap times to a minimum. In these larger braking areas, it’s best to use a reference point that’s close to the circuit: a bump, the start of an entry kerb or a change in asphalt material.

Obviously, the braking point doesn’t need to be exactly at the reference, but as you’re edging further and further into the braking a zone, a marker is vital.

What’s more important is to actively push yourself in these areas. With everything that’s happening when you’re on track, it’s easy to reach mental capacity and settle into a comfortable, but ultimately slow, pace.

If you easily slow down for a corner when using a braking reference, ensure that on the following lap you push yourself a metre or two later.

Using this simple strategy, you’ll find the ultimate braking point in a handful of laps, without running the risk of going off the circuit.

A BRIEF INTRODUCTION TO FINDING THE BEST SET-UP COMPROMISE

Our Driver’s University will study race car setup a little later in the series, so I won’t go into making setup changes too much today.

However, I feel it’s important to explain that race car setup is always a bit of a compromise.

As we’ve spoken about today, circuits are thankfully made up of various corner types, and while we can change our driving technique to suit them between turns, we cannot change the setup so quickly.

Therefore, when we’re prioritising corners, it’s also important to think about how we might set our car up differently.

For example, a car’s setup should be different at a circuit with heavy braking zones and large traction areas (such as Zolder, Belgium) as opposed to a fast a flowing circuit (such as Silverstone GP, England).

How we might change a car specifically for these circuits is outside the scope of this article. However, I wanted to mention it as it’s something that should be in mind and something you can work on if/when you understand car setup well.

So, that’s all for this weeks tutorial. Thank you for reading, and if you enjoyed it, please share. See you next week, Scott.